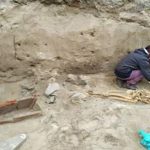 Ancient graves, as well as a drinking vessel with a Dionysian scene and perfume estimated to date from the second century CE, have been found by archaeologists working at sites in Bulgaria’s southern Black Sea town of Sozopol.

Archaeologists have been examining a necropolis in the sea garden and the remnants of a public building near the port since October.

Graves, including of 10 children and of a woman, estimated to be from the fourth century, have been examined at a site on the outskirts of the Kalfata necropolis, which has been studied for more than 80 years, Bulgarian National Radio quoted archaeological museum Dimitar Nedev as saying.

Many interesting gifts and funeral ritual items had been found there, including the drinking vessel with the Dionysian scene. “We hope that after it has been restored, it will be displayed at the annual archaeological discoveries exhibition in February at the National History Museum,” Nedev said.

Another curious find is a glass jar, resembling a small flask, containing a purple-coloured liquid.

“We found a balsamarium sealed with the so-called Greek chewing gum. It is full of liquid, probably Roman perfume from the second century. It was used to anoint the dead in their journey to the beyond.

“We hope to identify the natural ingredient from which it is made, and that it could be the basis for some new item in the perfume industry.”

The current archaeological excavations will continue until the end of the year, and if the weather permits, into the beginning of 2020, Bulgarian National Radio said.