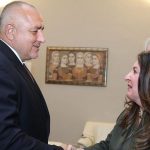 Bulgarian Prime Minister Boiko Borissov held talks with the new US ambassador Herro Mustafa on October 22, assuring her that Bulgaria and the US are allies and strategic partners, according to a government media statement.

At the talks, held at the Cabinet office in Sofia four days after Mustafa presented her credentials to head of state President Roumen Radev, Borissov said that sustainable political dialogue had been established between Bulgaria and the US at all levels.

Borissov congratulated Mustafa on her appointment and expressed confidence that diplomatic relations between Bulgaria and the US will continue to grow, the government media statement said.

Borissov noted the excellent interaction between Bulgaria and the US in the field of security and defence – both bilaterally and within Nato.

He said that both the current US presidential administration and the Bulgarian government attach great importance to fulfilling the commitment at the Nato Summit in Wales in 2014 to increasing defence spending.

Borissov said that Bulgaria has practically achieved this Euro-Atlantic goal with contracts for the delivery of F-16 Block 70 aircraft and related equipment and armaments, the statement said.

He emphasised the potential to build on the strategic partnership with the US and other areas such as energy security, high technology development, education, science and culture.

According to the Bulgarian Prime Minister, co-operation between Bulgaria and the US on the development of people-to-people contacts is of particular importance.

Various programmes and initiatives aimed at widening the exchange among students, scholars and business representatives have made a significant contribution in this direction, Borissov said.

He noted the positive trend in the increase in the number of US tourists visiting Bulgaria in recent years.

During the conversation, Borissov also was briefed on Mustafa’s main priorities for the work of the US embassy in Sofia, the Bulgarian government media statement said.