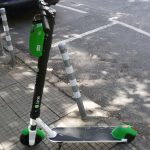 With two major companies renting out electric scooters in Sofia and a third reportedly soon to join the market, Bulgaria’s capital city is to propose amendments to the Road Traffic Act to regulate use of the vehicles.

The companies Lime and Bird have hundreds of electric scooters for rent in Sofia and the two-wheelers have become a common sight in the centre of the city.

However, users have been running into trouble with the law as Traffic Police have fined riders, saying that travelling on public roads on the scooters constitutes the use of an unregistered vehicle.

The fine is 50 leva (about 25 euro) but reportedly users have been disputing the fines, saying that they are unlawful in the absence of specific legislation on electric scooters.

Zafir Zarkov, deputy head of Sofia city council’s transport committee, told Bulgarian National Television that draft amendments to the Road Traffic Act were ready “so I believe that in a month or two we could have a regulation on the use of electric scooters in all parts of Bulgaria”.

On September 10, Bulgarian-language media reported that one amendment being considered by authorities was to allow people to use electric scooters only if they had a licence to ride a moped.

Reports quoted Bogdan Milchev of the Road Safety Institute as saying on September 10 that in the previous week alone, there had been 11 accidents involving electric scooters.

Other proposed amendments include allowing only people above the age of 16 to use the electric scooters and imposing a speed limit of 25km/h.

Traffic Police reportedly were checking whether existing speed cameras could be set to check whether a scooter was travelling at more than 25km/h. If the equipment could not be set for this, enforcing the speed limit for electric scooters would be impracticable.

Reports quoted Green Sofia as giving tips for riding an electric scooter, including wearing a safety helmet, using only bicycle lanes and the rightmost part of the road, and not riding on pavements, through busy intersections or traffic circles.